I’ve been noticing something in my network of friends and family of late. Really, it’s been there all along, but I suppose it started really jumping out at me a few months ago. Like most things that really jump out at me, I notice it more when other people do the same crap I do, so this is not presented as an indictment of them. I’ve noticed a remarkable difference between people who really excel at moving their lives forward and reaching their goals and those who trudge along more slowly, or fail altogether. While lots of things can impede success, from dumb luck, to bad timing, to rashness, or lack of skills, one thing I consistently see out of people who aren’t doing well when they should be (ie., in the absence of those other things) is that a large number of them seem to describe their situations, both to others and themselves, in terms of their own powerlessness.

Web Essentials, by Mads Kristensen (and many others now, thanks to having been open-sourced) is hands-down my favorite free Visual Studio add-in (the winner in the paid category is Resharper). There are a lot of big features in the tool that make it an awesome add-in, most of which have been covered in other blogs. However, for myself, it’s the little features that make the most difference. It removes more frustration from my day when a tool saves me 10 or 15 seconds here and there than it does when it saves me five minutes (although five minutes is great too, but the smaller tasks are something I notice more frequently). So, here are my top 10 things I’ve noticed in the web essentials tooling that make my day a little easier: 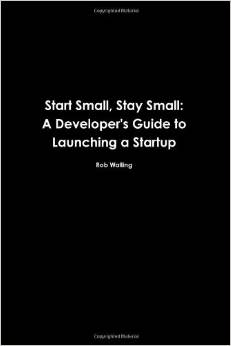 Every so often, a book comes along that exceeds my expectations (not going to bury the lede here, this book absolutely gets a 5 star review). This one is certainly in that category. Start Small, Stay Small is an excellent guide to getting a product-based business going as a software developer. From the outset, Rob Walling doesn’t make the assumption that you have a large amount of money from investors or that you are playing the start-up lottery. This book is about building a sustainable business one step at a time, usually while working a full time job.