I don’t normally post on Fridays, but I’m doing so today in honor of a very special birthday. Today, my paternal grandfather would have turned 100 years old had cancer not taken him from us 21 years ago, and as I’ve reflected on things he taught me so many years ago, I realized that perhaps the best way to memorialize that would be to share some things. I’m writing a bit freeform, so I hope this doesn’t turn into a eulogy (I can’t do the man justice). 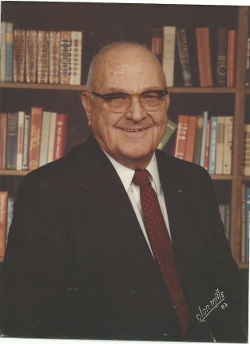 Papa was born just after World War I broke out in Europe to Elijah and Ethel Parsons Gant. He served honorably in the second world war (one of his brothers, Winston, died during the war and my father and I are named after him). He never talked much of it to myself and my cousins, but I do know he served in the European theater of the war. I recently found an article from one of his compatriots regarding the two hours he spent in a German concentration camp on a reconnaissance mission (this is detailed further here by someone who was actually there). I remember seeing the photos after his death when we found them in his footlocker. Those photos are now in the Holocaust museum and I don’t know how someone comes back from seeing those sorts of things as a kind gentleman, but he managed it.

Somehow, this bold man came home, started a family and a business (well, he got married to my grandmother in 1938, before the war started for America, but didn’t have children until after the war) and continued on. He gave myself and at least one of my cousins old (expended, thankfully) artillery shells that he brought back. I remember sitting wide-eyed in his office at the oil company he founded, that the family still owns, with him giving the shells to myself and my cousin John, explaining to us that they came from the war.

It’s odd thinking about what to say. Some men knew him as a fellow soldier in war. Others knew him as a business partner, competitor, or friend (some probably as all three). My father and his brother knew him as their father (and the man that took them hunting…a lot). I remember a kind old man, who sat me on his lap in a leather chair, gave me candy orange slices and watched Patton with me (and we probably both would have been in hot water had my mother or grandmother known I was watching war movies, but I think it’s probably ok to tell now). I remember him shaking his head at some things in the movie, but was too young to realize that all that stuff was memory for him and that he had a very different impression of some things than I did.

I do remember a few other things he taught me about business and life in general (although it took me years to realize he was teaching me more than he was talking about at the time.). I remember getting my first wallet when I was probably 7 or 8 years old. I don’t remember what kind it was, but I have a vague recollection that it was blue. I happily told him about it when I went out to the oil company to wait until my father got done for the day and could go home. I remember him doing what everyone should do when a small child runs to you, exuberant about something that is mundane to an adult. He was happy for me. Then he sat me down and said that if I was old enough to have a wallet, I was old enough to learn something important about it. He showed me how to organize my money, “big bills” in the back (a $10 bill he pulled out of his pocket, in this case) and smaller bills in the front. I remember him telling me how important it was to have my finances organized, so I knew what I could do and what I could not in short order, rather than having to scramble around and try to figure it out at the last minute. I still organize my wallet that way to this day.

Another day, he was telling me about starting the oil company (I think this was well before the wallet incident, as I don’t remember it as well – I was just barely old enough to read). I saw a bill he was sending out to one of the larger customers and the amount on it was absolutely mind-boggling to my young mind. I asked him how in the world somebody could afford to buy that much oil (I think it was a manufacturing concern that is still open to this day). He answered, “they make more money than that, because they have that oil”. I think I must have looked confused. Papa had a lady (Mrs. Walker) working there with him who did some of the accounting, all sorts of secretarial work, and probably had to keep various personalities on the staff in check as well, who took one look at my face and said “Mr. Gant, I think he’s confused”. And I was, terribly. I couldn’t get my head around how anybody could spend that much money (it was probably like $200 – I was a kid) on oil and have any money left over. So he asked me to explain what I didn’t understand and I told him that. Papa asked me a simple question that has been the underpinning of my understanding of business ever since. He said “Well, let’s say that every time you give me $10, that helps you get $20 from somebody else. How often are you going to give me $10?”. That is the most distilled, succinct definition of how functional businesses with a revenue model (as opposed to many dot com businesses) work. And that was the first time I remember the concept of business actually making sense. That little tiny bit of knowledge has kept me out of some mighty bad start-up ideas as an adult, because I couldn’t figure out where the $20 came from. It’s all easy after that.

My grandfather passed on in 1993 after an extended battle with cancer. He kept his sense of humor a long time. I remember close to the end going to see him in the hospital and the hospital staff would frequently slip medicine into his jello to get him to take it. By then, he was already at the point where he couldn’t speak, but I remember the nurse coming in to offer him some more jello. My grandmother was looking the other way and he looked our way and made such a face when offered the jello. I giggled and he grinned – he looked like he’d eaten a green persimmon. My grandmother turned around real quick and he straightened right up like nothing happened and then winked when she looked away again. I know it sounds like a small thing, but I think he recognized that we were trying to be brave and he was trying to give what comfort he could, even though he was the one who was suffering terribly.

And in the end, that’s the measure of a man. His friends from the war knew him for what he did there. His business partners knew him from business and personal life. His sons and daughter knew him as a caring (but stern) father. I knew him as a kind old man who made me think, always had candied orange slices (or those circus peanut candies, which I declined) in a little dish beside his leather chair, and who let me watch movies about a period in his life, without saying a word to aggrandize his own role in it all, or even what he saw. In the end, that’s what we all are to those who know us. Sure, I knew he saw the war. I knew he saw Buchenwald. I knew he built a successful business, married a great woman and stayed with her for 50-something years. That’s intellectual knowledge. But I KNEW a kind old man, who built an oil distributorship serving five counties with trucks running all over the place, who took time out of his day to sit down with a little kid and watch a movie with him on an old black and white TV, or teach him something he would use for the rest of his life. And he pulled all of that off, after the horror of war. There’s really not much more I can add.